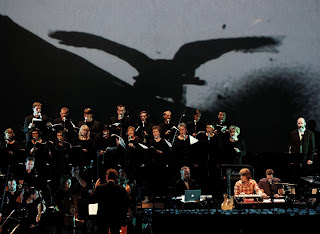 The re-mastering of this amazing concert has breathed new life into what is a modern classic. I have removed all clapping in the interludes so you have a pretty much seamless concert.
There is some excess noise on the first two tracks which unfortunately came with the original, I tried to EQ them out but in the end I have just left them so as not change the track as a whole. Sorry.
If you havn't got this one get it, if you have it already be sure to download this re-mastered version - its well worth it

This score is based on a lost chapter of the bible of norse mythology, the edda.

the edda was originally an unwritten oral history of heathen and early christian scandinavia, where the region's isolation led to a long changeover period to organised religion around 1000ad. the stories, myths and legends of heroic deeds and nordic strife were collected together by persons unknown sometime during the 12th and 13th centuries, before being recorded by danish scholars during the 17th century.
in the 19th century the authenticity of one of the chapters was questioned by a later generation of academics, and 'odin's raven magic' was excised from the text, adjudged as a 15th century fake. now some 150 years later new research has concluded that 'odin's raven magic' was indeed authentic and this autumn it is finally being reintroduced to the edda. it is the loss, and subsequent rediscovery, of this hidden history that sigur rós and hilmar örn hilmarsson are marking here.