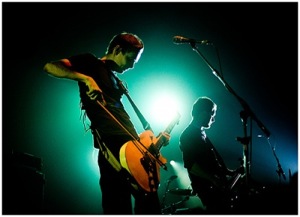 This, the second performance of 2000 is a stunning show. Its quite amusing to hear Jónsi have a light hearted joke with the crowd before launching into some of this incredibly intense and powerfully emotive music. This show is very special in that we have a very rare performance of
Bíum Bíum Bambaló & Dánarfregnir Og Jarðarfarir. Listening to the incredible performance of these 2 songs one wonders why they didn't play them more! Although purporting to be a soundboard recording there is a couple of things of note I need to mention. Firstly, although the original files are .Wav its quite possible they may have originally been lossy. However this hasn't had any audible bearing on the audio itself. That being said the quality isn't as good as others. There was a lot of hiss, a fair amount of which I removed but which is still fairly prominent during quieter sections. These technical points aside its a very powerful and enjoyable concert especially during the louder sections.
This section is no longer relevant as this new Source 2 (thanks khat!) is now perfect. One of the greatest live Sigur Rós finds that has been until un-circulated. It makes me very happy to have this now in perfect quality both to listen and to share