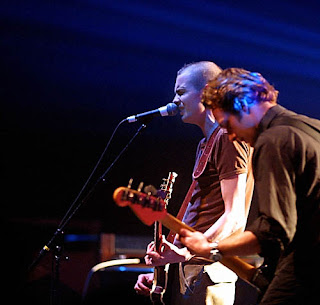 A very nice quality concert although there were quite a few 'oddities' that arose during the mastering! Its archived as an audience recording but there were some audio artifacts that appeared, that Ive only seen before; during the recording of a web-streamed concert and there is a brief drop out in signal. For this reason I've amended the lineage. Also the tracks do differ slightly in quality throughout the concert so again this may be possible with bitrates dropping & rising during a stream. Anyway, its still a very nice concert that does seem to share something off a soundboard type element in the audio so its reccomended.