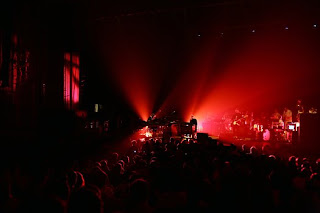 
This is the same concert as previously posted although this version does not contain the complete set list. However the sound quality for this one is exceptional and I feel better than the FM one. Also with the previous FM Broadcast post there are elements that sometimes give it something of a feel of an audience recording (although as stated its still a superb concert) There where 2 extra tracks that came with this recording, the radio announcer introducing and ending the show. I haven't included these as they had no relevance to the music although this will explain the sharper than usual fade out at the end of the last track!
A fantastic show and certainly due the mixing, one of the most interesting to listen to from this period